Gitschin 1866, Portable Wargame with no toys

John put on a PW game covering Nachod (also in 1866) a couple of months ago, and I was keen to give it another go as the original rules were aimed specifically at the nineteenth century. John had used a pre-publication version and I wanted to try it with the rules from the original book which had some importance differences.

The other thing I wanted to try was a different set up. The Skype+Camera thing is fine as far as it goes, but there are often comms issues through the sessions and the biggest problem is player orientation. My APW stuff is all in 6mm and making any sense of what was going on at all would have been quite hard remotely without doing big bases, labels etc. I was interested in trying something a bit different.

Early in lockdown, Simon helpfully pointed out a site with some game assist software specifically aimed at the Portable Wargame : https://www.cottonreeltank.org/cafelunar/gamecabinet/gridgame/

There are a series of packages covering various iterations and periods of PW, and very kindly, the source code is also available for download. The main thing it offers is the ability to manouvre graphical objects across a background in a rather easier manner than e.g. using my mapping software or Powerpoint Slides or whatever. My programming skills are rather antedelivian, ending somewhere around C and SQL with a smattering of Java, although I did spend a moderate amount of time doing HTML database applications.

This is all written in javascript, the hackers delight (whoever thought allowing browsers to execute code was a good idea?), but it is fairly easy to pick up. Back in April I spent a lot of time playing around with it with a view to doing double blind operational games and I became reasonably competent at editing the unit database, replace the tile based terrain system with maps and fiddling around with the functionality. I made a lot of progress setting up a WW2 map based divisional level operation, but for whatever reason I never quite got around to running a game with it though.

Anyway, fast forward to August, and I thought I may as well try and run a PW game on it, what it was originally designed for. I did do some customisation, I modified the unit database to remove all the tricornes from the figures an instead have Prussians in picklehaubes, Austrians and Saxons in shakos with re right uniform colours and facings etc. I also replaced the terrain tiles with my own map, scaled to fit the virtual figure bases and added some extra markers (explosions, activation markers etc).

I picked Gitschin as a scenario, as it is an interesting battle and made a change from Prussians trying to cross mountain passes into Bohemia. The scenario was based on the Wyre Forest Gamers one for Fire & Fury Francesa, plus some mods from Wavros account of the battle.

Here is the basic setup. The Austrians have to hang on to Gitschin until the end of the game while also linkng up with the Saxons (en route from the south) and then withdrawing the Austrian army intact! The whole position is one of those surveyed by the Austrians in the eighteenth century. The big hill in the middle has cliffs on its north and west edge, which makes this an outstanding defensive position.

Meanwhile two entire Prussian armies are en route via the north and west roads, each with a division as a vanguard. 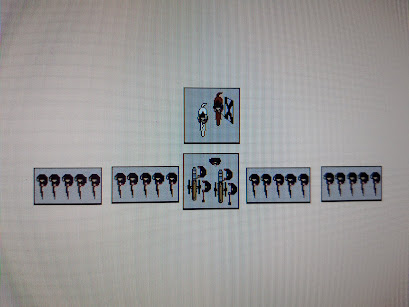 A Prussian division. Four infantry regiments, artillery battalion and HQ. I was pleased with how the Prussian flag came out, and if you look very carefully they have all got the right cuff and shoulder colours etc. The gun carriage is also Prussian Blue.

The hardest thing was modelling the infantry as the standard PW doesn’t really model the tactical gulf between the Austrians and the Prussians. Regiment for Regiment the Prussians were at least twice as combat effective as the Austrians, if not four times as effective based on the relative loss ratios as the Prussians had breechloading rifles and were dispersed, whereas the Austrians had muzzle loaders they hadn’t been trained to fire and also deployed in dense assault columns which made them into dense targets.

In the end I just went with combat equivalence, so one Prussian regiment was the equivalent of an Austrian brigade. As Prussians were spread out in skirmish columns, and the Austrians jammed together into storm columns that explained the difference in real estate occupied.

That worked quite well as the detached Austrian Corps holding Gitschin was a big one, with five brigades (aka ‘Divisions’) plus an attached cavalry division, so it kept the unit count down. The Saxons I gave the same ratio as the Prussian, one unit per regiment, as they knew how to fight in supported skirmish lines and could both actually fire their rifles and all speak the same language. 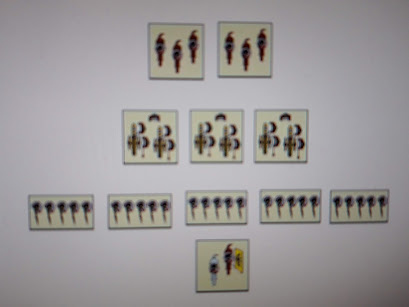 The Austrian Corps, five ‘divisions’ (representing a brigade of two regiments), a full artillery regiment with three battalions and its attached cavalry division, which should have three brigades but I modelled it as two because cavalry were hideously vulnerable to rifles in 1866.

As the Prussians have two divisions with five units apiece, and the Austrians also have ten, that doesn’t seem unreasonable. Due to the notorious command problems facing the ployglot Austrian army, I also reduced their activation level by one, so their median activation is five units to the Prussians eight, lets see if that is enough for the Prussians to overcome that nasty defensive position!

Numbers were low for this one and Simon and Tim C drew the Prussians, John and Jerry the Austrians and Saxons. 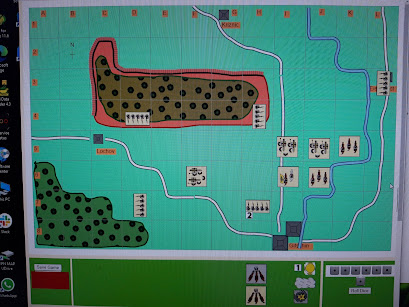 There is the opening setup, based on the historical one. The Austrians set up as series of interlocked flanking positions covering the routes around the forested mountain, with the guns ready to blast anyone foolish to try and walk through the gaps and the cavalry in reserve. This setup actually works quite well in PW given the move restrictions. The Austrian 2nd Div had been chewed up at Munchengratz and was held in reserve near Gitschin. 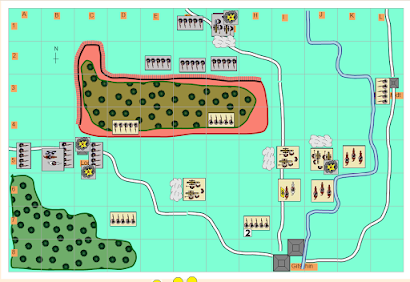 Simon helpfully pointed out that screenshots would be much clearer images, so here are a few of those. Tims Prussians came up the road in a column, which if course precluded nay possibility of retreat, so it was a good job the Austrian gunners were rotten shots. The explosions are there to record grids fired on.

Simons Prussians very bravely decided to try and storm the almost impassable mountain! Their guns also came under Austrian CB fire. I was expecting a broad outflanking move astride the stream, which was what the Prussians did irl, but that is why wargames are fun. 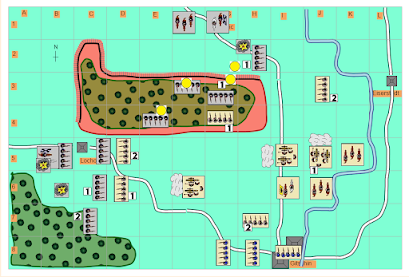 After a few turns the Prussians had shaken out into lines, and had even managed to get up onto the mountains. The fearsome Austrian guns had eliminated the Prussian artillery (oh the shame) and now worked over the Prussian infantry. By now the Saxons were marching on from the south (the blue figures in row 8) and the Prussian cavalry brigade had turned up. 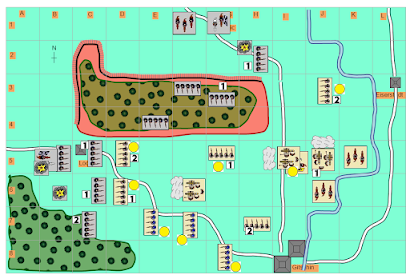 By the end of turn 5 the Prussians had cleared the wooded hill, while the Austrians had locked down their right flank. Over in the west the Austrian and Prussian lines faced off, but the Saxons were moving up rapidly now.

We broke for the night after turn 5 and resumed the following day. 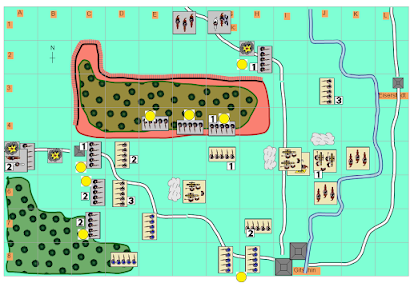 As the action resumed the following day the Austrians were starting to look a bit ragged in the west, but the Austrian artillery had manage to push back one of the Prussian regiments, and also wounded the Prussian divisional commander! (I was using the commander rules from the Napoleonic PW). Not good news for the Prussian exhaustion level. 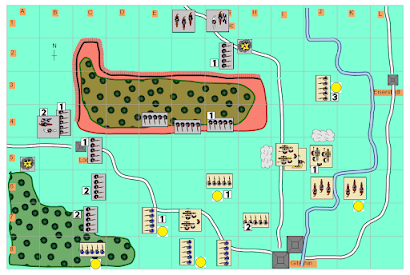 The Prussians pushed hard and the Austrian brigades in the west finally broke and ran, the Austrian artillery and infantry were also pushed back in the centre. (I wasn’t sure if artillery which had fired could retreat, but this is clarified in the Napoleonic PW). This was enough to push the Austrians over their exhaustion point, but by now the Saxons were well forward and had even pulled a sneaky flanker on the Prussians in B7. 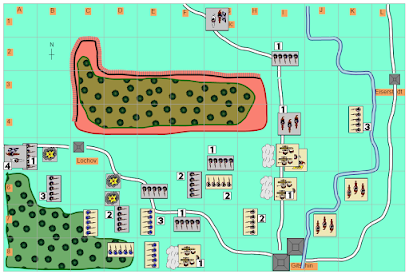 The Prussians pressed home their advantage, including a glorious cavalry charge against the Austrian guns north of Gitschin. Sadly this was repulsed, and the Saxons put up a stiff fight in the cauldron battle in the west. The Austrian artillery also managed to wound one of the Prussian divisional commanders again, and the weight of losses was sufficient to exhaust the Prussans.

We called it a day at that point. The Austrians had held Gitschin and were in a good position to get their army off the southern edge of the table, but sadly they had been exhausted in the process. The Saxons were still a few hits from their exhaustion point and the Prussians had been fought to a stand-still and lost all their guns! So a tactical victory to the Austrians. 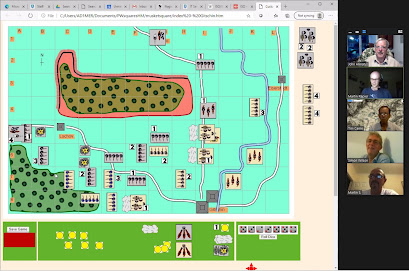 The game software working fine over Zoom, ad the players said it was much clearer than our more usual Webcam/Skype setup. A screenshot of the player experience is above.

The game itself went fine, more smoothly than last time. There were still a couple of geometric confusions and I’m glad we went with Napleonic version of the leader risk rules. I think rating the units on the basis of combat equivalence worked fine, as the Prussians would have really struggled against fourteen Austrian and Saxons regiments(!) instead of five Austrian brigades and four Saxon regiments. The Prussians didn’t get to make much use of the superior troop quality until later in the game as they didn’t leave themselves enough space to be able to retreat. Still, it all rattled along nicely and we were done in less than two hours of play.

As the Portable Wargame is listed as one of the sets, here are my answers to his questions:

How long did the game take to play?

What was the scenario?

a. The Battle of Gitschin in June 1866. This is also modelled as one of the One Hour Wargame Scenarios. I used the historical version of the battle I’d used for Horse, Foot and Guns (itself based on the Wyre Forest Gamers scenario for Fire & Fury Francesa).

What happened?  Anything extraordinary?  (troops holding out amidst terrible odds?  Savage attacks that tore through the enemy line?  A straight string of rolling 6s or 1s?)

a. The failure of the Prussian cavalry charge was a bit surprising. A full cavalry brigade into the flank of unprotected gun batteries fails to obliterate them? The Austrian counter battery fire was also hideously effective.

Who won and why?

a. The Austrians. They just managed to wear the Prussians down enough to stop them.

Did you enjoy the game? Why?

a. Yes. It moved along at a good pace, the players had plenty to think about and the result seemed plausible.

After reading the rules, how many consultations occurred with the rules during the game?

a. At least three – artillery retreats, threat to leaders, and once again, the ease of getting flank attacks.

Was the scenario created for you or did you create it?

a.I created it based on another one. It has been used before with other sets of rules.

Did any troops perform remarkably good or bad?  Was it luck or part of the mechanics?

a. I would have expected the Prussian infantry to tear their opponents apart, as they did repeatedly in the real campaign. It was a bit more of a slog in the game.

What were the victory conditions in your game?

a. The Prussians had to capture Gitschin or exhaust both the Saxons and Austrians. The Austrians had to hold Gitschin and withdraw the Austrian Army in good order by turn ten.

0 comments on “Gitschin 1866, Portable Wargame with no toys”