The Games We Play: Battle of Lodz

I’ve been reading Pritt Buttars excellent series of books on the Eastern Front in WW1, and I was inspired to do a linked scenario mini campaign (similar to my old 6th Panzer Div in Lithuania or Siege of Tarnopol campaigns). Rather than do boring old Tannenberg which is amply provided for, I thought I’d have a go at Von Mackensons attempt to encircle and destroy 30 Russian divisions in western Poland in late 1914. This short campaign later became known as the Battle of Lodz, after the crucial communications centre the battle focussed around.

The Germans planned to drive south between the Vistula and Warta rivers, cutting the rail lines through Lodz and isolating the Russian forces massing in western Poland preparing to invade Silesia. The Germans were outnumbered at least 2:1, but lousy Russian staff work and logistic limitations had led to a huge gap opening up on their northern flank.  The gap was vaguely covered by 5th Siberian (Reserve) Corps, but it too had serious logistic issues as the Vistula had few crossings, and it was easily brushed aside by Von Mackensons army in early November.

Rather than game the initial attack (which is unwinnable for the Russians), a more interesting action was the German attempt to exploit south while Russian forces hurried northeast from Lodz to protect their rear.

This engagement covers the battle at Kutno on the River Bzura on 14th November 1914. V Siberian (Reserve) Corps has retreated in some disorder from the advancing Germans and is regrouping around Kutno. II Corps is moving out from Lodz to protect the  northeast approaches to the city. Unkown to them, no less than eleven German divisions in four Corps are advancing from the north….

We played this using OP14 (with Tims hex modifications) and my 15mm WW1 stuff on Hexon terrain. The hexes are 2km, turns 1.5 hours and each unit is a brigade (or Cavalry Division) of several thousand men or several dozen guns organised into Corps sized formations.

View the the east. V Siberian is grouped around Kutno in the centre, Von Mackensons Army is off to the right and Lodz the top left. Far ahead is the Warta and behind us the Vistula. The rail line through Kutno is the main LOC for V Corps. 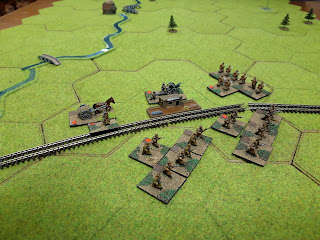 V Corps around Kutno. After losses in the opening actions they are down to three brigades. As a reserve unit they have no heavy artillery, as Russian reserve units were fairly poor, they on a D12 (big dice are bad in OP14).  Jerry and Diego took the Russians. Jerry positioned his troops with one eye on that bridge over the Bzura, a raging torrent at this time of year. 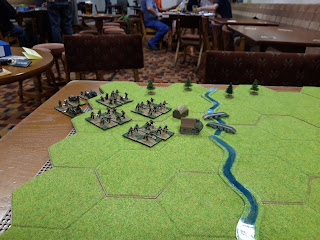 Diegos IInd Corps comes marching on. The weather was determined to be thick fog (it is mid November in Poland in a river valley, so hardly surprising). This meant the opening moves would involve blundering around in the mist until it cleared. 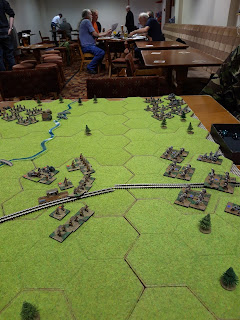 The German XVII and XX Corps come marching on, commanded by John and Tim respectively. These were regular German infantry, fleshed out with garrison troops and well equipped with field guns and 150mm howitzers. The thick fog grounded 16th Flieger Abteilung though. 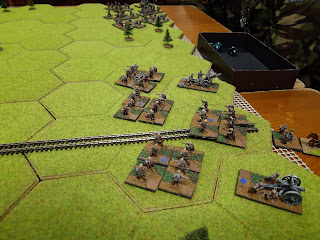 Close up of XX Corps in march order. The fog provided welcome cover from observation. 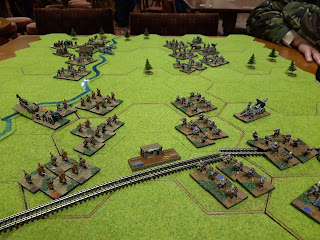 As the Germans closed in, V Corps cunning plan became apparent, a phased withdrawal across the Bzura. Jerry kept one brigade deployed facing the Germans while everyone else hightailed it for the rear. The challenge of moving 30,000 men and all their transport and guns across one bridge should not be underestimated! 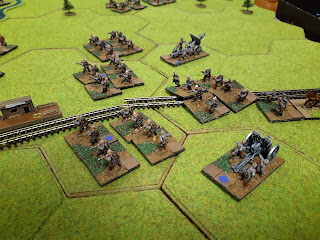 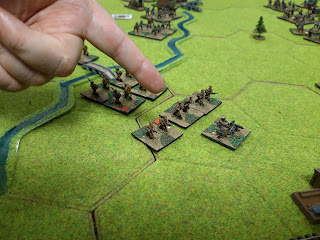 As the marching columsn shuffle slowly over the river, the rearguard deploys defensively, including its MGs. This posture provides greater defensive firepower and better cover against artillery fire. Jerry helpfully points out his brave Maxim gunners. 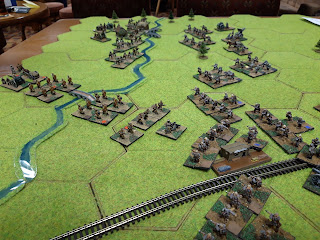 XX Corps presses forwards up against the rearguard and deploys its artillery.  There is every possibility the Germans will catch the Russians, depending on the card draw next turn, especially as the Russians are hampered by logistic problems. 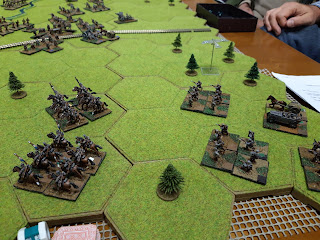 Yet another German unit rolls on, the mighty XXV (Reserve) Corps, reinforced with 3rd Guards division and an entire Cavalry Corps under von Richtofen (a relative of the famous fighter ace). This is Von Mackensons schwerpunkt, tasked with exploiting south and cutting the rail lines from Warsaw to Lodz.

In another exciting development, the fog clears and 16th Flieger Abt takes to air , spotting for XVII artillery which inflicts losses on the Russians massed behind the Bzura. 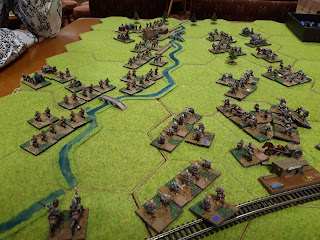 Jerry manages to break contact with XX Corps and retires over the river. The Germans can only watch in frustration as they slip away. The cards were kind to the Russians. 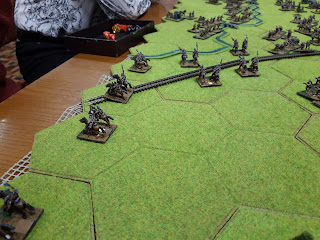 Von Richtofens cavalry spread out into a screen along a 12km front. 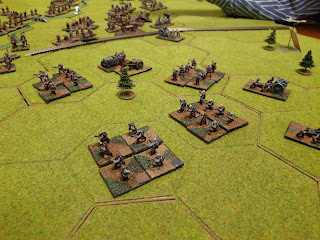 XXV (Reserve) Corps marches steadily south, its route obstructed by clumps of woodland. The November days are short and night will be falling in a few hours. 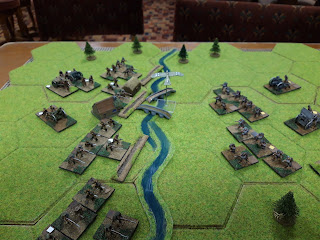 In the west, XVII Corps keeps on shelling the Bzura crossings spotted by aircraft, while the Russians frantically dig trenches. 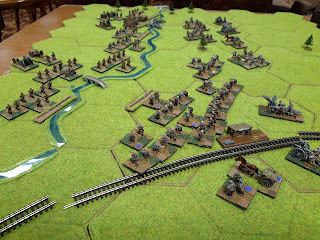 Having pushed V Siberian behind the river, XX and XVII Corps deploy and start to dig in as night falls. 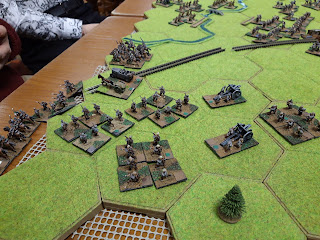 Meanwhile von Richtofens cavalry and XXV Reserve Corps head south. The siege of Lodz is about to begin.

That all went rather well and amusingly both sides were able to claim victory. Jerrys rearguard action was really quite tense as the units are all large and cumbersome, so it was quite a feat to break off with minimal losses. In the end there was little in the way of intense infantry fighting as both sides manouvered for positional advantage, and all the losses were inflicted by artillery, the Russians suffering quite heavy losses despite their entrenchments.

Historically V Siberian was pushed out of Kutno rather than voluntarily withdrawing, suffering considerable disruption in the process. XXV Corps then managed to break through. So it all ended up quite historical. The foggy start and short day added a certain urgency to the proceedings, while the card activation of the Corps added an acceptable level of friction. The Russians suffered a certain amount of dithering and even a friendly artillery fire incident, and the Germans were impeded by the various obstacles in their path. The aircraft spent most of the day on the ground, but on the odd occasion they put in an appearance, they added a significant force multipler. This is the period OP14 was designed for, and it works very well.

0 comments on “The Games We Play: Battle of Lodz”