A few years ago I picked up a great bargain at Triples, a PSC US 1944 Tank Company army pack. The RRP on these is usually over 80 quid and iirc this went for about 25 so a great saving. It includes a dozen Shermans, three M5s and five M3 halftracks as well as a full companies worth of US Infantry.

I already have some M3 halftracks so I didn’t need to assemble the ones in the box, but I had it in mind to do a few conversions as my US troops seem to be a bit short of AA weapons. Let the bodging commence! 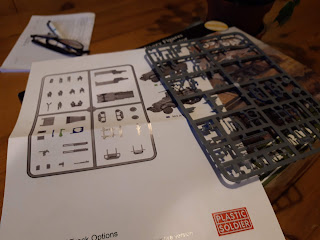 The PSC halftrack is a quite a simple model, reminiscent of the old Airfix offering. It offers M3 and M3A1 variants with both .30 cal and .50 cal MGs. 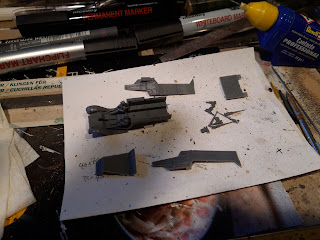 There aren’t too many fiddly parts, but to get things straight I put the body together in one go as there aren’t any obvious locating pins on the parts. 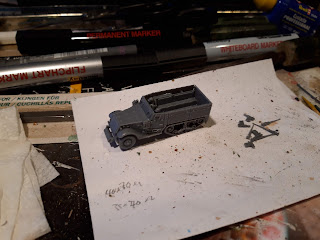 That came out OK. Unlike earlier PSC offerings, the tracks are single piece mouldings and beautifully detailed. I’m glad they have stopped doing the multi-part tracks. 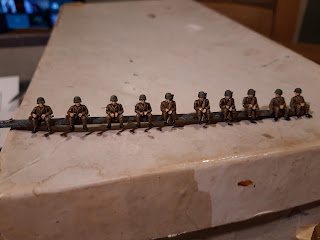 The halftracks also come with some passengers, and as my existing collection is a bit bare, I thought I’d paint a few up. I just did them in plain khaki (maybe they’d just got their woollen shirts on today) so at a glance they’d pass for US, Russian and maybe even British troops… I did think about doing some sort clever insert thing with different US, British and Russian figures on but in the end I couldn’t be bothered. 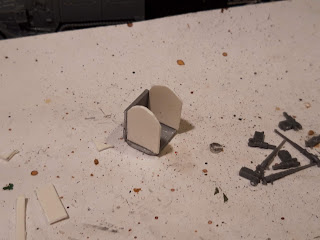 I did three or four seconds of  extensive research on the internet and found a few grainy pictures of M16 AA halftracks. Good enough for a bodge. I first built a box out of plastic card in roughly the right size. The curved rails defeated me so I just cut curves with a pair of scissors.

Among other things, I have around seventeen PSC Shermans which yielded a plethora of spare .50 cal MGs. I’ve also got a load of spare metal PP and Battlefront ones, but the plastic is easier to work with. The guns are heaped up next to the mount. Only one barrel broke getting them off the sprue. 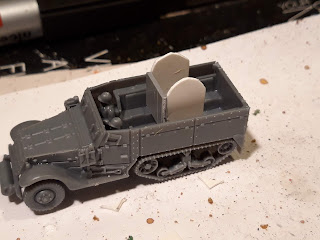 The mount sits OK in the back. I should have probably taken the seats out, but hey ho. The tops of the armoured sides were often folded down  on the real thing, but there are plenty of pics with them up too. 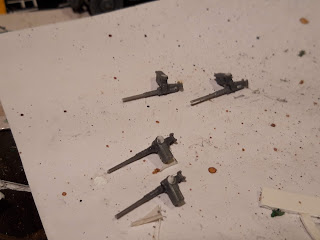 On the real thing, the .50 cals have a sort of semi-circular high capacity mag (possibly powered?) which sits above the breech. I didn’t fancy scratch building those so I just chopped up the standard .50 cal mounts and put the ammo boxes on top of the guns. I’m sure that will be fine. 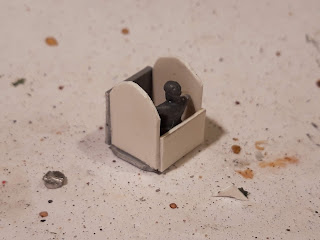 While the guns were drying I put a figure in the mount. For some unaccountable reason I used a US tank crewman, when I could have just used one of the passenger figures. Well, I don’t suppose it matters. As he hasn’t got any legs I had to build a little platform for him to sit on. 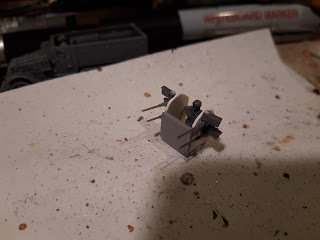 The really fiddly bit was sticking the guns on in a manner which approximates the original, and getting them all pointing in roughly the same direction. Not easy with big banana fingers, but thank goodness for plastic and the melting qualities of Revell Contacta glue. On the real thing the magazines overlap the guns above, but I couldn’t work out how to do that in a study enough manner to survive handling. 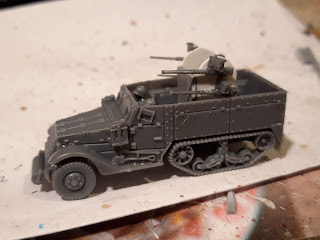 I was going to keep the AA mount free standing (like my Russian quad Maxims) but in the end I just stuck the whole thing in the back. It doesn’t look too bad I think, and you can also see the exquisite detail on the PSC model. 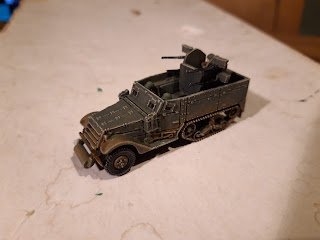 After that it was just a matter of painting. Basic OD (VJ Russian Uniform with a wash of Bronze Green) then a good dollop of mud and dust. I did the crew the same as the passengers in plain khaki and didn’t do any markings so it can pass for both US and Russian service. 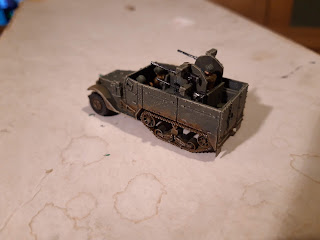 I’m pleased with how that turned out, it sits like the real one. I do enjoy doing these little modelling projects, even if it is completely pointless, as I expect you can buy a model of one of these. 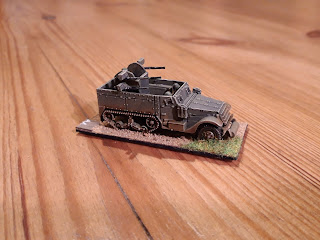 Here it is based up. 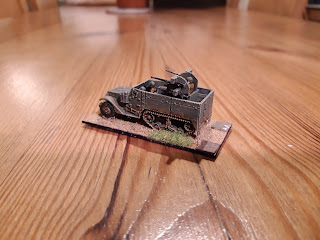 Funny how basing just makes things look better, even vehicles (although I know many people who don’t base vehicles)

0 comments on “The Games We Play: Bodged M16 halftrack”