Long time readers will know my aversion to sticking metal guns together, but the last few haven’t been too bad, not even the Bofors guns and the one piece Pak 38 was a real winner. I’ve wanted to get some proper heavy artillery for my WW2 Russians for a while, although British 5.5″ guns and US 105mm and 155mm howitzers have done fine so far.

So, I took the plunge and got a couple of QRF D1s instead of the resin Gaming Models ones or Irregular Really Useful Guns I’ve been planning on getting. That 20% discount was very attractive.

Here they are blatting some Hitlerite invaders, and they don’t look too bad do they? Well, these big boys were a right bu**er to assemble. I don’t know if they were missing some parts, perhaps they were. The main problem was that they had wheels, trails, barrels and gun shields but no apparent means of putting them all together. Perhaps the gun mount was missing? The wheels just had little stubs and no axle so presumably they were supposed to stick to something. 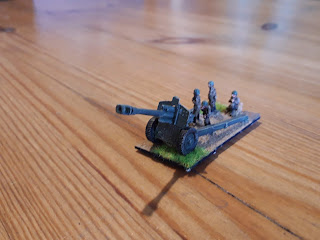 I did get them together in the end by building a gun mount out of foamcore, slathering it in blu tak and superglue and then shoving all the bits together and hoping for the best. The blu tak gave it a bit of flexibility while the glue cured so I could keep adjusting the angle of the various bits on both guns simultaneously.

In the end they came out OK, but oh dear, what a faff. 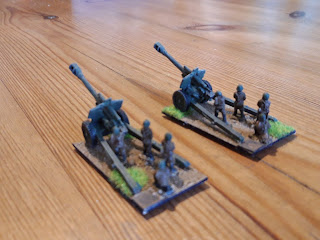 Being heavy guns, they come with four crew figures  included (one of the really good things about QRF guns) although to my untutored eye they look suspiciously like Cold War Russians as I’m fairly sure Y strap webbing is a post 1945 thing. The US 105mm howitzer crews who were similar,  clearly Vietnam era gunners in flak jackets etc. In this scale it doesn’t matter too much, just slather them in paint and they look like Russians. 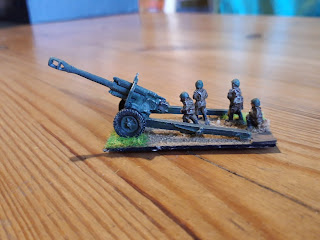 View from the side. The pile of blu tak the gun barrel is sitting in can be seen but it isn’t too obvious from other angles. I just did this in overall Russian Green with a bit of a highlight.

They came out OK in the end but not an experience I’d care to repeat. I may just have been unlucky, QRF stuff is normally fine, but I’d struggle to recommend these to anyone.