I’ve idly thought about making some Crocodile trailers for my existing Churchills, but as I was putting an order in anyway I thought I’d get a proper Churchill Croc from QRF as for some scenarios I’m slightly short of gun armed Churchills too.
The Churchill VII was one of the most heavily armoured British tanks of the war, it saw combat service in Korea and in Northwest Europe, the majority (some 300) were employed as armoured flamethrowers with a smaller number assigned to Churchill tank regiments. It was heavily armoured enough to keep out even 88s out at moderate ranges.

Here it is trundling across the dining table. I mounted the trailer separately so I can use this as a normal gun tank (and it is much easier to store too). Having got a trailer model, I can also. use it as a template to build some of my own 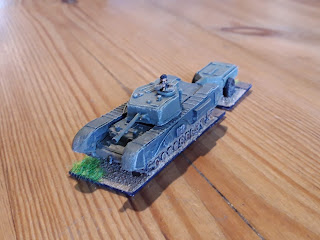 This is a lovely model, really crisp and easy to assemble. The parts fitted very well and had minimal flash. It is also much better detailed than my Skytrex Churchills with a really nice bomb thrower moulded on the turret.. The only fiddly bit was the bow flame projecter which in the end I left off 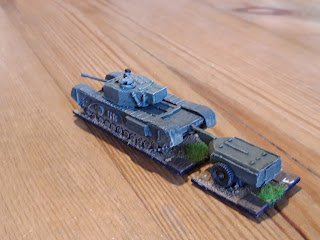 You can see the bomb thrower nicely here. The moulding on the engine deck is fairly light but good enough. I ran a micron pen around the hatch cover edges to make them stand out more. The commander is a twenty year old Peter Pig one I had in the spares box. You can also see how long and thin it is (like the Cromwell) to work around the British railway tunnel restrictions for transport. 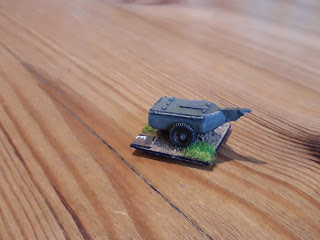 The fuel trailer is a nice solid piece. I mounted it on a bit of foamcore painted black to keep it upright. The wheels aren’t quite as chunky as the originals but fine for a 15mm model. It would be fairly easy to carve two of these out of foamcore and add some details for those odd occasions when I need a whole troop of Crocs. 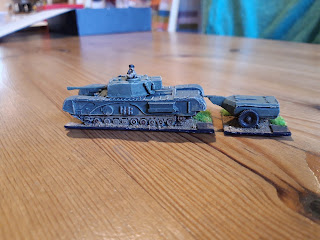 I just did the whole thing in khaki green as it is a late war vehicle, with a very liberal application of mud as these saw a lot of action in the very wet winter of 1944/45. I gave it a wash of olive drab and then did a dark brown pinwash on some of the panel lines to give it some depth, followed by a very light drybrush of light stone to pick out the highlights. As is my current habit, I didn’t bother with any markings, but I might paint a few on at some point.

0 comments on “The Games We Play: QRF Churchill Crocodile”