Along with the ground attack planes and fighters, I thought my Russians could do with some bombers and as my efforts to find cheap Lend Lease B-25s failed, I went with some Zvezda SB-2s in the delightfully eccentric 1/200th scale.

Here are the pair of them. It is a good job they are 1/200th as their wingspan is enormous. These are the versions with in-line engines rather than radials (which I think makes them a bit more modern?). Well, who cares really, they are great big bombers covered in red stars and I’m sure they are perfectly capable of showering bombs all over cowering Hitlerites until 1945. 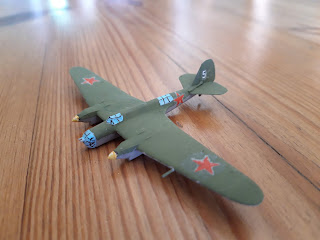 The kits went together reasonably well, most of it was fine but the tail planes were a bit fiddly due to Zvezdas insistence that these are ‘snap fit’ models. The elevators sort of overlap each other in a slot in the fuselage and in the end I just gave up trying to make them fit and slathered them in glue instead. They are still a bit wonky but hey ho. 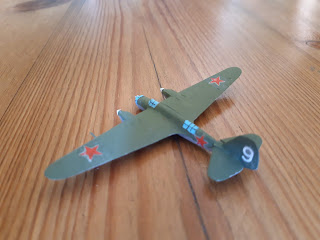 I just did these plain green (Humbrol Army Green) with plain red stars and tail numbers in varying styles. There is a fair bit of perspex on these and the smaller scale means the bars are very small indeed so I gave up trying to paint them and did them with a micron (0.05mm) pen which seemed to come out OK. 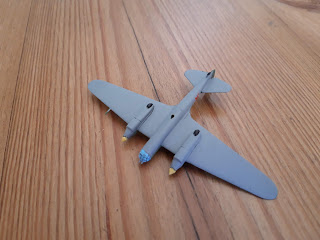 Usual plain underside. The kits come with options for underact retracted or deployed. One casualty of my fat fingers was the antenna post on the underside. It was never going to survive an undercart up use anyway so it is probably better removed before painting. As with my other planes, I lopped of the prop blades to save my wargaming pals doing it for me and I think it looks better. 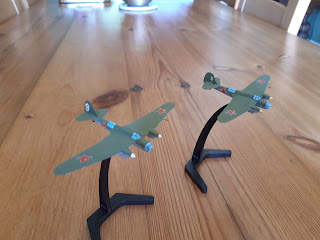 And off they go to bomb Berlin, as the bomber will always get through. I was really pleased with these, they came out well and look the part. I’ve already got some 1/300th SB-2s but the bigger models are just more pleasing.